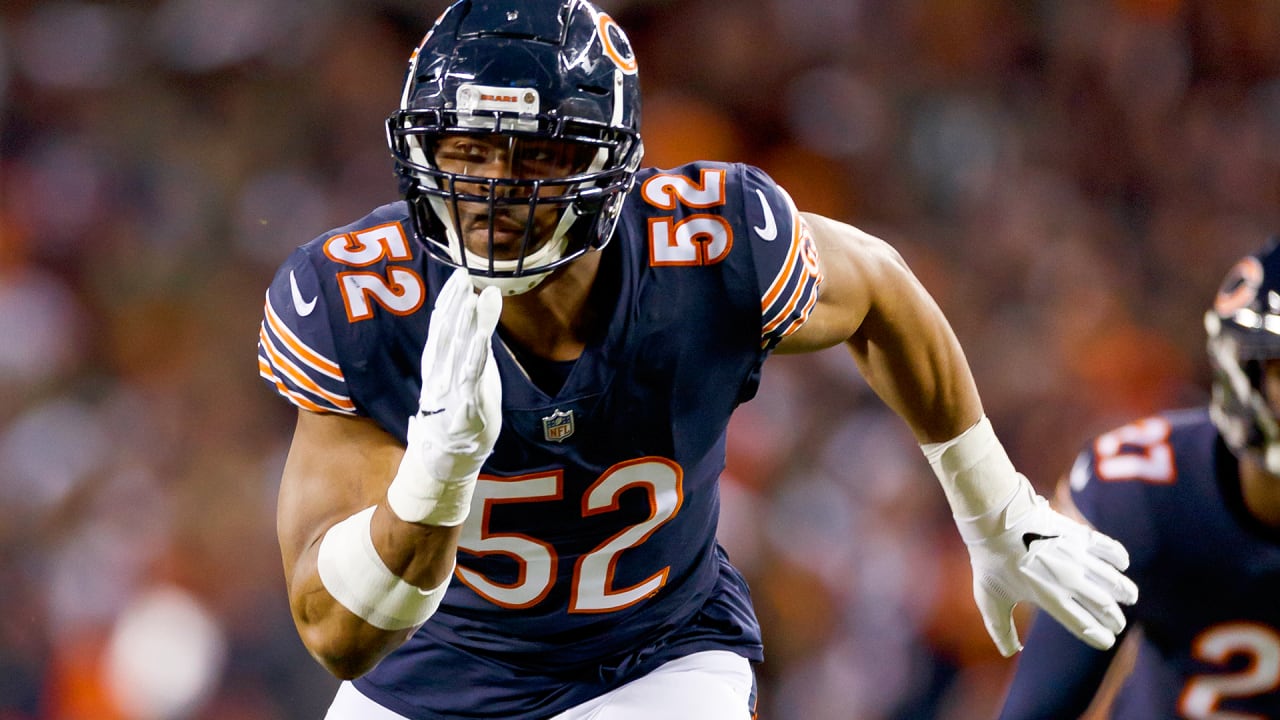 “You’ve got a phenomenal athlete,” said new defensive coordinator Chuck Pagano. “He’s a great football player, but he’s a better teammate and he’s a better person. He doesn’t say much, but actions speak louder than words. He’s a great worker. He’s a smart guy. He picks things up.”

Mack was named the NFC defensive player of the month for September after registering five sacks, four forced fumbles and returning an interception 27 yards for a touchdown in the season opener against the Packers.

“He did it every day,” said coach Matt Nagy. “It was all consistent. He never changed. He affects the game just because offenses want to double, triple and quadruple team him and what that does is ultimately creates mismatches and one-on-one battles for the other players.”

After recovering from a hand injury that limited him early in the season, Floyd began performing like the player the Bears envisioned when they traded up to select him with the ninth pick in the 2016 NFL Draft.

The Georgia product returned an interception 19 yards for a touchdown Nov. 4 against the Bills, the first pick and second TD of his three-year NFL career. The 6-4, 251-pounder recorded three sacks in a three-game stretch late in the season, including two of Aaron Rodgers in a 24-17 division-clinching win over the Packers Dec. 18 at Soldier Field.

“[Floyd] is just a guy that can do so many things as a pass rusher, but yet he can be very effective with the run game, too,” Nagy said.

The Bears are hoping that Floyd picks up in training camp where he left off during the offseason program.

“He’s steadily getting better,” general manager Ryan Pace said Sunday during his pre-camp press conference. “If you said—and I know it’s hard with just shorts on—what player, non-rookie, stood out to you in this offseason program, it would be Leonard Floyd. Just as he develops his pass rush, as he develops his counters, working with [coach] Ted Monachino, working with Khalil Mack, I just feel like he’s getting better and better. And so that’s going to be exciting to see, specifically in his pass rush. I just feel like his repertoire, his toolbox, has grown.”

Trevathan brought veteran leadership and playmaking ability to a defense that led the NFL in several statistical categories. The eighth-year pro finished second on the unit with 102 tackles while also registering two sacks, two interceptions, eight tackles-for-loss, one forced fumble and one fumble recovery.

Pagano sees Trevathan as a veteran leader who commands respect from his teammates on and off the field.

“He’s one of the hardest working guys out here,” Pagano said. “He knows the system inside and out. He’s one of the first guys in. He’s the last guy to leave. He does a great job from an accountability standpoint.”

Selected by the Bears with the eighth pick in last year’s draft, Smith led the team with 122 tackles, two shy of Hall of Famer Brian Urlacher’s rookie record set in 2000. Smith also registered five sacks, eight tackles-for-loss, one interception and five pass breakups while playing in all 16 games with 15 starts. He added a second interception in the Bears’ wild-card playoff loss to the Eagles.

Pagano has been impressed with Smith’s football character and football IQ.

“He’s one of the brightest, smartest guys I’ve been around for just a second-year player,” Pagano said. “He’s phenomenal. He’s very quiet. He doesn’t say much. He’d be a great poker player because you can never read what’s going on inside his head and doesn’t show a lot of emotion. But he’s absorbing everything. He takes everything in. The guy doesn’t make mistakes. Out on the football field he does a lot of things you can’t coach.”

Outside linebacker Aaron Lynch also returns after compiling 16 tackles, three sacks, one interception and four tackles-for-loss while appearing in 13 games with three starts in 2018.

Inside linebacker Nick Kwiatkoski is back as well. Last season he produced 10 tackles, one forced fumble and four special teams tackles while playing in all 16 games with one start. He also caught a two-point conversion pass from Mitchell Trubisky in the regular-season finale against the Vikings.

Other players who return from last year’s team to compete for playing time include outside linebackers Isaiah Irving, Kylie Fitts and Josh Woods and inside linebacker Joel Iyiegbuniwe.

3 things that stood out to Chicago Bears head…

Anthony Lynn not ready to rule out Tyrod Taylor…