Perfection. Winningest. Greatest. Words can’t quite sum up Don Shula’s impact on the Miami Dolphins, but those three are a good start.

It’s impossible to write the history of the NFL, the Dolphins and the city of Miami without discussing Shula, who died Monday morning at age 90.

Simply put, Shula was a winner. In his 33 seasons as an NFL head coach, Shula had two losing seasons. His 347 wins, including the playoffs, are the most in NFL history. Miami won 66% of its games with 16 playoff bids and five Super Bowl appearances — including back-to-back titles — during Shula’s 26 seasons as coach (1970-95). 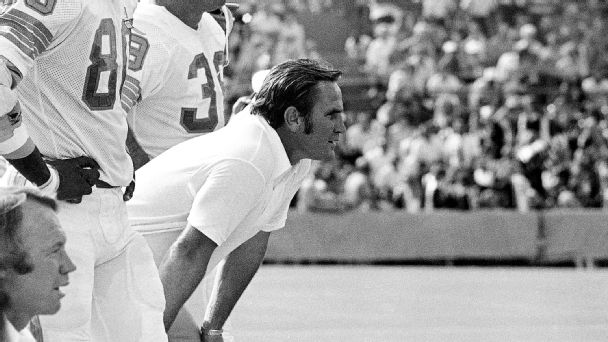 Former Dolphins coach Don Shula helped write the history of the NFL. Here’s a look at some of the memorable games he coached in:

The Dolphins haven’t been the same since he left. Miami has had 12 other head coaches who’ve combined to win 46% of their games, with seven playoff bids and no Super Bowl appearances in the 28 seasons without Shula.

Many of those who played for Shula remember him as a fierce but caring man, and those memories poured out as they discussed him. They lauded his intelligence and preparation, particularly in taking over a 1969 team that went 3-10-1 and immediately making it dominant in the early 1970s. In Shula’s first five seasons, his teams made five consecutive playoff appearances with four AFC East titles, three Super Bowl appearances and two championships.

“He’s the greatest coach that I’ve ever had,” former Dolphins running back/returner Mercury Morris said. “He produced a team that is the best ever, so he’s the best ever. I’ll always remember how we practiced, how we played, how we dominated and how Don’s philosophy, genius and strategy came together. We kicked off a great run that started from nothing and ended up being everything.

“He knew how to turn adversity into success. We saw that after we lost Super Bowl VI. The very first day we reported to training camp the next year, he brought us all together to watch the game and grilled us on our mistakes. He said, ‘See how sick you feel now? Just think how sorry you’ll be if you don’t redeem yourself this year.’ And we did, winning every game we played.”

Shula demanded respect from anyone who played for him, and he wasn’t shy about speaking his mind. He knew how to build a championship team, and it started with getting buy-in.

Dolphins Hall of Fame guard Larry Little recalled his first interaction with Shula shortly after the latter was introduced as Miami’s coach in 1970. Little introduced himself to Shula, who then asked him how much he weighed. When Little said 285 pounds, Shula shook his head and walked off.

“It wasn’t long before I got a letter from him telling me to report at 265. I had to lose 20 pounds for that man. But he was right — my career took off after that happened,” Little said.

Csonka remembered the whole team knowing never to cross the Shula respect line … or else you’d be on your way out of town.

“He gave me the impression that I could be up in Buffalo blocking for O.J. [Simpson] with snow up to my ear tomorrow if I felt strongly enough to challenge him. So I didn’t. We knew where the line was,” Csonka said. “One-on-one in his office, you could show him all the anger and frustration that you wanted. But you showed him respect as the drill sergeant in front of the team. … Everybody knew it, and it was the same if you were Dan Marino or Larry Little or anybody.”

Former Dolphins safety Dick Anderson remembers the “abrupt about-face” that happened when Shula took over as coach for the more laid-back George Wilson. Shula had every minute of the day planned with a purpose, scheduled four-a-day practices and pushed the players to their limits.

“Sometimes I resented him for it,” Csonka said. “More often than not I resented him for it. I muttered with the rest of the players — this is too much, too long, too hot, too everything. But the result was perfection. One time. In the course of 100 years, one team made every play it had to make during the course of the season to obtain perfection. That’s a microcosm of what he was about. That kind of dedication. Once we learned that in 1972, I never questioned him again.”

Shula is the only head coach in NFL history to lead a team to the Super Bowl in three different decades (1960s, 1970s, 1980s). He coached against a man who was an NFL head coach when the league began in 1920 (George Halas) and someone who is still a head coach today (Bill Belichick). Shula went 5-4 against Halas and 2-0 against Belichick.

Among the highlights of his longevity, Shula coached 15 Hall of Famers, including quarterbacks Marino, Bob Griese and Johnny Unitas. He also coached or coached against 70 of the 100 players named to the NFL’s all-time team.

“He was the driving force behind everything we accomplished with the Dolphins,” Griese said. “Whether it was his force of will, his organization, his work ethic, sense of integrity or his total focus on winning, he molded us into champions. And the entire time he was doing that, he served as a role model for all that was right in sports. While he started out as my coach, over time he became more than that. He became a mentor, and even better, a great friend.”

That was a common refrain from players who all noticed that Shula’s demeanor toward them softened as their relationships evolved from coach-player to friendships. Some former players even remarked that the tough, serious Shula had developed a sense of humor later in life.

“He was very demanding but very fair because he was consistent with everybody,” Anderson said. “Off the field, he was a very friendly, open individual. … Once you didn’t play for him anymore, he didn’t yell at you anymore. My relationship with Coach Shula over the last 40 years has been very rewarding.”

Changing with the times

A huge part of Shula’s success was his ability to adapt to the changing NFL. In 1972, Csonka and Morris became first duo to each top 1,000 rushing yards in a run-heavy offense. Griese threw only 11 passes in their Super Bowl VII win.

By 1984, Shula had completely transitioned his offense to a pass-heavy scheme led by Marino, who became the first quarterback in NFL history to throw for more than 5,000 yards in a season. Marino won the MVP that season, his second in the NFL.

“That is what a great coach, a coach like Coach Shula, would do. You evolve to the talent that you have and their abilities and what they can do best,” Marino said. “He noticed that we had two really special guys on the outside in [Mark] Duper and [Mark] Clayton. Then the fact that I was coming in as a quarterback who had the chance to be pretty darn good. You evolve to that. That’s just being smart.

“He told me to come in and learn the playbook in a way that he wanted me to call my own plays in practice, camp and minicamp. I thought that was genius because he put a lot more pressure on me as a quarterback to learn quicker. I felt like I was able to start and play a lot quicker because of that pressure he put on me.”

It all comes back to Shula knowing how to get the most out of his players, and that evolution to newer-age football made it different for the players he coached in the 1980s and 1990s. The change worked enough for him to lead two teams to the Super Bowl — in 1982 and 1984 — his last two trips to the big game.

“For me, he was willing to open up to other things in football that he wasn’t used to beforehand. He was very demanding, but he would also listen to your ideas and thoughts,” Marino said. “Maybe he wasn’t like that in the ’60s and the ’70s with the perfect-season teams. But with me, he was great that way.”

In the immediate hours after his death was announced, Shula received ultimate respect from many key figures across the NFL, including commissioner Roger Goodell, Belichick, former NFL commissioner Paul Tagliabue, Dallas Cowboys owner Jerry Jones, Dolphins coach Brian Flores, Dolphins general manager Chris Grier and many others throughout the Miami organization — past and present. It was a sign of just how wide-ranging Shula’s impact has been on the game.

“If there were a Mount Rushmore for the NFL, Don Shula certainly would be chiseled into the granite,” Dolphins owner Stephen Ross said. “His contributions to his sport, to the Miami Dolphins franchise and to the South Florida community will have a lasting impact. There will never be anyone like him.”

Shula wasn’t just a coach. He played defensive back in the NFL for seven seasons, notching 21 interceptions. He was a member of the NFL Competition Committee for many years, and several players credited his leadership style for helping them to be successful outside of football in their post-playing careers.

Glad Don Shula and the 1972 Dolphins were honored as the greatest at halftime of Miami’s home finale in December. It was fun to watch fans sing happy birthday to him. They also had a champagne toast on the field. A lot of smiles that day and love for a legend. pic.twitter.com/VuD2ksin6L

The last memory many have of Shula came on the second-to-last weekend of December, when the Dolphins threw him a surprise 90th birthday. Those in attendance remember sharing smiles, good memories and a firm Shula handshake. Csonka remembers it as the first time he ever saw Shula surprised — a hat tip to the master of preparation.

Shula and the 1972 Dolphins were honored that Sunday, Dec. 22, during halftime of Miami’s 2019 home finale — an overtime win against the Cincinnati Bengals. Donning green perfection jackets, Shula and his team received personalized golden footballs and toasted champagne as loud cheers erupted from fans in the stands.

Many of the members of that 1972 Dolphins team in attendance flashed their ring — one with 16 diamonds on the outside and one big one in the middle as a nod to their 17 victories — as their names were called out one by one.

Shula, sitting in his wheelchair with smooth sunglasses on, smiled and waved. Once again, perfection was at center stage, with Shula as the leader.

“Only one team can claim perfection — us. … Nobody gave us s—. We took it. Shula made sure we worked for everything we got,” Csonka said. “We took the hilltop and put the flag up. Now anybody is welcome to join us. But there will be two of us, and we will always be the first.”

Csonka opened up Monday afternoon about just how hard it was to hear when his wife called him about Shula’s death.

“I never knew how close that rascal really got to me,” Csonka said. “You realize after they are gone how much more they meant to you than what you realized when they were here.

“I don’t know where old coaches and players go when they pass away, but wherever that is, it just changed dramatically. There’s a lightning bolt coming with Coach Shula’s arrival. Things are going to change.”

Perfection. Winningest. Greatest. Yeah, that’s a great start in defining what Shula means to the NFL and the Dolphins. He will be missed.