Seattle Seahawks coach Pete Carroll unveiled significant news at the NFL scouting combine this past week, stating that Rashaad Penny is likely to begin training camp on the PUP list, which puts his availability for the start of the season in question.

It’s one more reason to think the Seahawks, who drafted Penny No. 27 overall two years ago, could spend another early-ish pick on a running back in April.

Starter Chris Carson is coming off his second straight 1,000-yard season but also a serious hip injury. And while the Seahawks expect him to make a full recovery by the start of the season after not needing surgery, he’s entering the final year of his rookie contract and has finished two of his three seasons on IR. Oft-injured C.J. Prosise is a UFA, as are Marshawn Lynch and Robert Turbin, whom Seattle signed off the street after losing Carson, Penny and Prosise late in the season. It’s not clear if Lynch even wants to play in 2020.

Penny had just started to emerge when he tore his ACL and suffered additional damage to his left knee Dec. 8. Carson and Prosise went down two weeks later.

If the Seahawks want to do that in the draft, ESPN’s Mel Kiper Jr. wrote that “there will be some really good backs who go on Day 2” even if he doesn’t consider the running back class to be as strong at the top as it has been in other years. The Seahawks have two second-round picks and are projected to receive a third-rounder as compensation for losing Earl Thomas, meaning they should have three picks on Day 2, with the potential to add more if they stick with their first-round MO and trade back from No. 27 overall.

Kiper projects Cam Akers of Florida State as one of those Day 2 backs after he posted a 4.47-second 40-yard dash (fifth-best at the position) at 217 pounds. Kiper listed Akers as one of the biggest risers from Day 2 of workouts and wrote that he would draft him “in a heartbeat” if he were available at the top of the third round.

ESPNs Todd McShay, meanwhile, believes Wisconsin’s Jonathan Taylor positioned himself to go early on Day 2 after a strong combine showing. He led all running backs with a 4.39 40, the third-fastest combine time for a running back weighing 225 pounds or more since 2006.

The Seahawks met with Taylor in Indianapolis.

Other Seahawks takeaways from the combine: 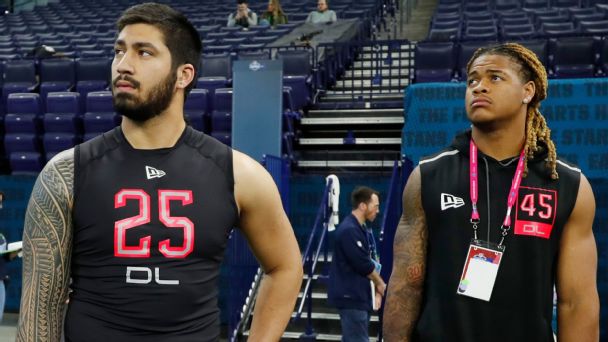 “It’s 80-90 percent of it,” Schneider said after the Graham trade when asked how much veteran additions are influenced by their view of that year’s draft. “It’s enormous.” The thinking was likely the same with Olsen. The remaining $1.5 million in his deal is in per-game roster bonuses, with $750,000 for the 53-man roster and $750,000 for the 46-man roster, according to a source.

That will likely influence the degree to which the Seahawks attempt to keep David Moore, a restricted free agent who had a better 2018 than ’19. It’s hard to imagine giving Moore a second-round tender, which OverTheCap.com projects to come with a $3.278 million salary. The low/original-round tender is projected at $2.144 million. The Seahawks could non-tender Moore, making the 2017 seventh-round pick an unrestricted free agent, and try to re-sign him for less than any tender amount. Perhaps that’s a risk they’d take, figuring they could find someone in the draft equally, if not more, capable of stepping into the No. 3 role.

3 players who won’t be on the Steelers roster…