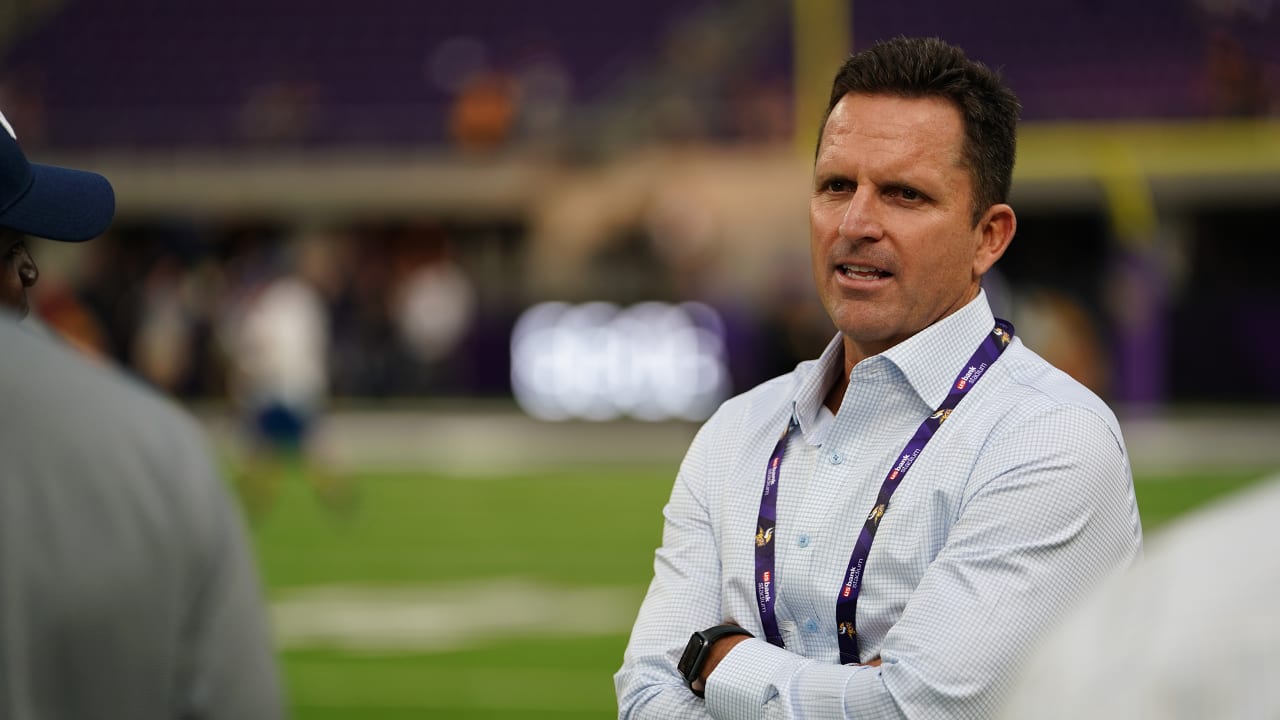 “We started our career back when I was the co-director in Chicago and he came in as an intern, I believe, in 1997-1998,” Spielman said. “When I left Chicago and went to Miami, it took me a year, but I knew that was the number one person I wanted to bring with me down in Miami. And then when I came here to Minnesota, it took me a year, but I was not going to give up until I was able to get George Paton up here with me.

“I’ve been in this business, I think, going on my 31st year, and I don’t believe I would be in the position I’m in without having George Paton by my side through everything that we’ve been through,” Spielman continued. “He’s been my sounding board, my closest friend and truly like a brother to me. Probably, and people don’t know this, but the biggest honor I had is when George and Barb, his wife, asked me to be the godfather of their son, Beau. I know it’s a lot of joy but a lot of sorrow, too.”

Spielman said he believes Paton has landed with a “great organization” and is going to a place with an “opportunity to have a lot of success.”

“While it is difficult to leave the Vikings, the relationships I enjoyed in Minnesota are for life,” Paton said Wednesday. “I am truly grateful for the Wilf family, Rick Spielman, Rob Brzezinski, Mike Zimmer and the entire Vikings organization. Thank you for treating us like family.

“I believe in hard work, the grind and not taking any shortcuts to achieve our goals. Drafting and developing players is the No. 1 priority,” Paton added. “We will be aggressive — but not reckless — in adding talent to our roster.”

“He’s so talented and he’s been mentioned numerous years for GM jobs, that he wasn’t looking just to jump to become a general manager,” Spielman said. “That goes back to his integrity, that goes back to his character. He was looking for a general manager job that he felt was the right opportunity for him, and Denver fit everything that he was looking for.”

Paton’s primary focus has been to coordinate scouting and personnel functions within the Vikings college and pro scouting departments and oversee year-round personnel transactions.

Spielman noted that Paton and Brzezinski, Minnesota’s Executive Vice President of Football Operations, have played significant roles during evaluation and execution of trades.

Paton’s acumen to evaluate players has been critical in the draft-and-develop strategy deployed by the Vikings. Minnesota has drafted or signed as undrafted free agents a total of 16 different players who have made at least one Pro Bowl.

The list ranges from Adrian Peterson and Sidney Rice (Minnesota’s first two selections of the 2007 NFL Draft) all the way to Dalvin Cook and Justin Jefferson, who garnered the honor after impressive seasons in 2020.

Additionally, Spielman’s level of trust with Paton reached a level where the GM felt comfortable with letting Paton steer the ship in Spielman’s place.

Spielman said he doesn’t expect there to be a significant overhaul in Minnesota’s personnel department, which has enjoyed a rare degree of continuity.

Spielman also mentioned Assistant Director of Pro Scouting Reed Burckhardt, who was promoted to that role in 2020 after working as a pro scout from 2017-19 and previously as a college scout. Burckhardt just completed his 12th season with the Vikings.

“It’ll give me an opportunity to see some of our people fill that void,” Spielman continued, “and I’m just planning on going forward right now as we are as a staff, because I know I have the utmost trust and I have the utmost confidence in the people that are in critical places in this organization that will fill a huge void, but I have no doubt they’ll be able to do that.”

Duce Staley ask to be released from contract with…