JACKSONVILLE, Fla. — In May, new Jaguars offensive coordinator John DeFilippo said running back Leonard Fournette needed to be a big part of the offense and would be a major reason for its success.

With the significant doubts about Fournette’s ability to stay healthy, his maturity and his work ethic, that seemed to be a bit of a gamble. But after a strong start to training camp, which includes being a bigger part of the passing game, there’s considerable optimism that Fournette could be headed for a big season.

So, what are legitimate expectations for the player the Jaguars drafted fourth overall in 2017? Fournette would only say he wants to be better than he was in 2018.

“Just taking camp and pretty much this whole season to a different approach than last year,” Fournette said. “Like I said, it’s Year 3 [of his NFL career]. Calais [Campbell] said yesterday Year 3 is when you find out which guys [rise to a higher level]. I’m hoping for it.

“It’s not pressure at all. I’ve been playing this game for 23 or 24 years, so it’s something I love to do. I take it serious, but just keep the same attitude, the same personality, just don’t change knowing what’s at stake and just have a better year than last year.”

That’s a pretty low bar. Fournette missed seven full games and half of two others with hamstring and foot injuries. He was suspended for another after coming off the bench and punching Buffalo defensive lineman Shaq Lawson.

The team told him they were not going to guarantee the rest of his contract (which only becomes an issue if they cut him) because of that suspension. He also was publicly ripped by executive vice president Tom Coughlin for his demeanor on the bench in the season finale. He gained weight during the season and there were questions about his commitment and professionalism.

On the field, he put up just 439 yards (3.3 per carry) and five touchdowns rushing. He caught 22 passes for 185 yards and another touchdown.

His steps since then have indicated he has learned from the experience. He went to the University of Wyoming to work out with a former LSU strength coach during the offseason. He didn’t attend every OTA, but coach Doug Marrone said he was pleased with the way Fournette practiced and worked when he did show up. Fournette reported to training camp in good shape and hasn’t missed a practice. 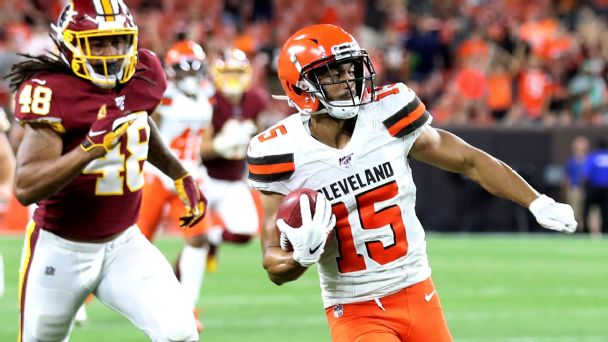 As camp progresses, it’s become clear that Fournette will be a bigger part of the pass game than he was in his first two seasons. That’s in part because that’s a significant part of DeFilippo’s scheme and because he wants to give Fournette as many touches as possible.

“I think he’s caught numerous balls each day of practice, and that’s a role that position needs to play,” DeFilippo said. “There’s pass plays that are an extension to your run game. If you throw a guy a wide route, it’s basically like tossing the football and trying to circle the defense, so that’s going to be, I don’t want to say a huge piece of our offense, but it’s definitely going to be a piece for us.

“And that’s a credit to Leonard, because we’re trying to find different [and] unique ways to get him the football, and not just handing it to him all the time.”

What happened on the sideline during last Thursday’s preseason opener might be an indication that Fournette has matured and is taking things more seriously. He didn’t play, but he had on a headset so he could hear DeFilippo’s playcalls — and that was at his request. When the young backs came off the field, Fournette spent some time with them, too.

None of these things guarantee that Fournette will remain mostly injury-free and play 16 games (he’s missed nine games the past two seasons with injuries). Or that he will surpass 1,000 yards rushing or have 1,500 all-purpose yards and 15 touchdowns if he does. There also are too many things that are out of anyone’s control, such as injuries on the offensive line.

But there certainly are some positive indications through the first week of the preseason that Fournette could be on his way to the best season of his career.