PHILADELPHIA — Not even a week had passed since his release from the Philadelphia Eagles and there was veteran cornerback Orlando Scandrick, going hard after his former team on national television.

Appearing on FS1 in late October, he took aim at everything Eagles — from locker room culture to general manager Howie Roseman to team leader and fellow defensive back Malcolm Jenkins, whom he charged with selfish play.

“To know now that that’s kind of what was in your locker room, it feels good to know that it’s not here,” Jenkins said in response and referencing to Scandrick, a free agent who played for the Dallas Cowboys from 2008 to 2017. “For us to move on as a team, we can’t have a m—–f—– like that in the room.”

Monday through Friday, host Mina Kimes brings you an inside look at the most interesting stories at ESPN, as told by the top reporters and insiders on the planet. Listen

It was the latest example of the often disastrous results when a player moves from one side of the Philly-Dallas rivalry to the other — a feud that will be renewed Sunday when the Eagles and Cowboys tangle for the NFC East title belt at 4:25 p.m. ET (Fox).

“I never felt like I was actually an Eagle,” Scandrick told ESPN this week. “I never felt really comfortable.”

Uneasiness. Mistrust. Guilt. Rejection. These are some of the side effects that can come with an attempted crossover. And it flows both ways.

“When I signed [with the Cowboys], it was weird, man,” said cornerback Nolan Carroll, a free agent who played for Dallas in 2017 following three seasons in Philadelphia. “I just felt, being in the locker room with the guys I was with in Philly and creating that bond, I felt almost sort of like I was cheating on them.”

“The guys were cool, but it was still one of those, ‘He was on the enemy’s side,'” Carroll continued. “So they viewed me still like that, and I think the coaching staff viewed me the same way. I had to try and go above and beyond to prove that, ‘Hey, I don’t play in Philly anymore. Don’t see me as the guy wearing the Eagles uniform and helmet. View me as a Cowboys player with a star on my helmet.’

“I remember the same thing with Miles Austin when he came in from Dallas and came to Philly [in 2015]. You’re used to seeing him in one jersey and now he’s my teammate, and I still just view him as a Dallas Cowboy. It’s just so ingrained in your mind to dislike your opponent because so much is on the line.”

The trust took time to be earned.

“I’m not giving [the Eagles] secrets; I’m not telling them what’s going on in the locker room,” ” Carroll explained. “I had to really get that point across to the other guys to have them feel more comfortable with me and to trust me out there on the field.”

The biggest bust of a union in recent memory was when free-agent running back DeMarco Murray, the reigning rushing champion in 2014, signed a five-year, $42 million contract with the Eagles in March 2015 after receiving a less lucrative offer to stay in Dallas. His rushing yards plummeted from 1,845 yards to 702 under Eagles coach Chip Kelly, whose system fit Murray just as poorly as the Philly culture.

“From everything I heard, I think once he went there, it never felt right and I think he wanted to go back [to Dallas],” Scandrick said of Murray. “And for me, I asked to be released and to leave, and once I did that, I kind of wanted to go back.

“I was raised there [with the Cowboys], I was drafted there and I went there such a young person. In life, you make mistakes and you think the grass is greener, and it’s not always greener. I still have so many friends there from the front office; I still have a great relationship with the Joneses [Jerry and Stephen]. You make irrational decisions in life at times, and that’s part of living. You learn from it. The Eagles, the Redskins, those things never really happened in my mind. It was basically 10 years in Dallas and a year in Kansas City.”

A handful of players have made the switch successfully. After a falling out with the Eagles, wide receiver Terrell Owens took up with the Cowboys in 2006 and continued on his Pro Football Hall of Fame path. Mike Ditka was dealt from Philadelphia to Dallas in 1969 — a move that proved to be a godsend.

“My two years in Philadelphia were not very good. The Eagles weren’t very good; I was not very good,” Ditka said. “Probably the best thing that ever happened to me, and I’m not sure why he did it, is [Cowboys coach] Tom Landry trading for me. I went to Dallas and it shaped my life. It resurrected me personally and as a player.”

Others were less grateful to be dealt to Dallas, such as Hall of Fame receiver Tommy McDonald. “I’m flabbergasted,” he said in 1964. “I feel like I’ve been thrown away for an old shoe.”

Former offensive lineman Brian Baldinger started his pro career with the Cowboys in 1982 and finished with the Eagles (1992-93), and he is one of the few players who feel comfortable identifying with both teams.

“I was always kind of around [the Philadelphia] area [growing up]. But going to play in Dallas coming out of college, playing for the Cowboys, they were America’s Team. It was a big deal,” Baldinger said. “I’ve got Dallas Cowboy T-shirts. I’m not wearing them around here in Philly, but I’ve got Dallas Cowboy T-shirts. I’ve got Cowboys boots and all kind of good mementos from some good days.”

Then there are the standouts who made pit stops in enemy territory toward the end of their careers, such as former quarterback Randall Cunningham and former wide receiver Harold Carmichael, who just couldn’t talk himself into accepting the Cowboys.

“No question, I think the players that have had to make that transition find it very difficult,” said Ron Jaworski, who played quarterback for the Eagles from 1977 to 1986. “Harold was my guy here with the Eagles. And after his career ended, he went to Dallas for a cup of coffee, and he would tell you he hated it, man. He couldn’t put that helmet on. 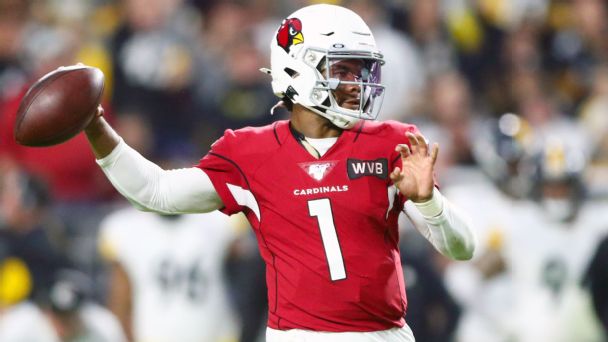 • Kyler’s leadership growth ‘night and day’
• Tales from playing for both Eagles, Cowboys
• Inside bond between Reid and Nagy
• How Daniels Jones compares to other top picks
• Winston has chance to prove himself

“Because here in Philadelphia, as a player, it’s the game of the year — at least from when I came to Philly in ’77. The schedule came out and [coach Dick] Vermeil would circle those two Dallas games. Those were the games that were most important to us. For a 10-year period, it was just embedded in my brain that you’ve got to beat Dallas. So when players go back and forth, yeah, they may say they’re loyal, they have allegiance to that team that is signing your paycheck; but I think deep down inside, guys feel a little bit awkward when they come from Dallas to Philly, or Philly to Dallas.”

Philadelphians care about two things, according to Jenkins: “The Super Bowl and beating Dallas.” Players who have worked in the city long enough begin to adopt that mindset. In the summer of 2018, after being cut by the Eagles following an 11-year run, tight end Brent Celek was asked on a 97.5 The Fanatic radio show if he would contemplate joining the Cowboys to extend his career.

“Hell no,” Celek replied. “Do you think I would play for the Cowboys? Philly is my home. If they offered me $10 million, I still wouldn’t go.”

Given the history of attempted crossovers, who can blame him?

2020 South Side Questions: Does Diontae Johnson’s…