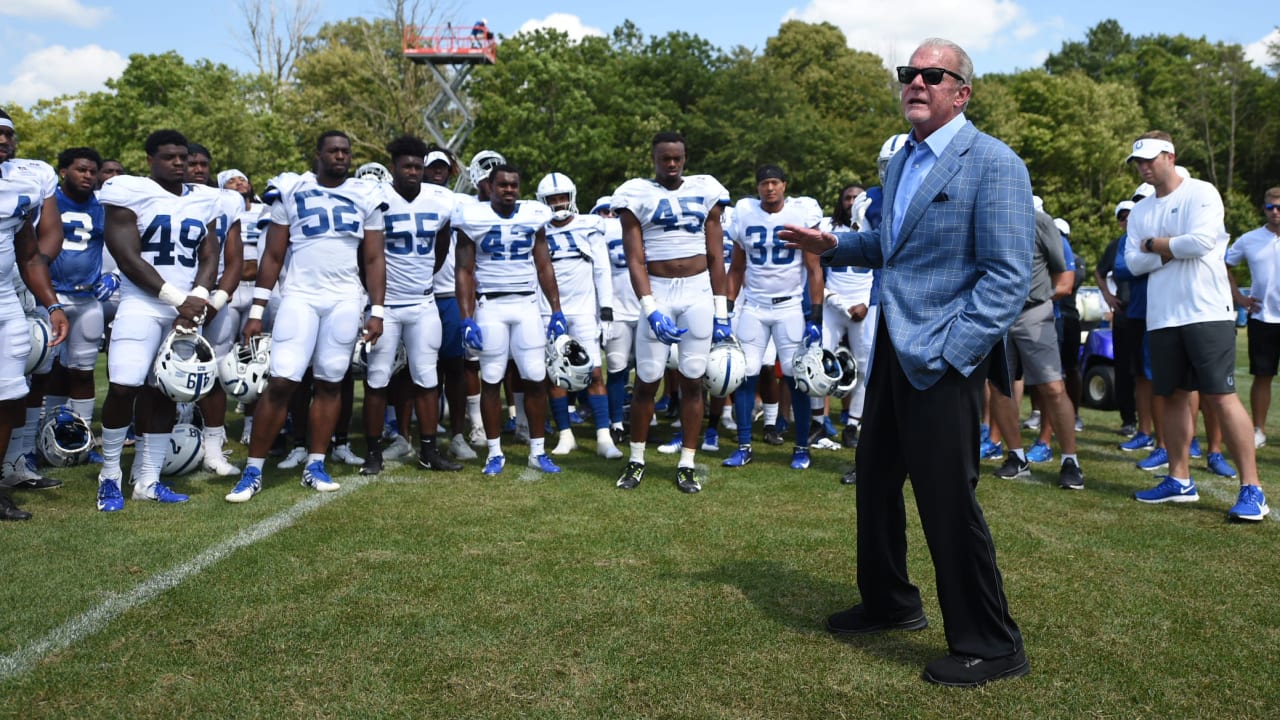 » From good to great: Irsay knows what it looks like to see his team make the jump from good to great. So what does that mean? There’s a clear difference between simply being a playoff contender and being a perennial Super Bowl favorite. The Colts last season, their first under head coach Frank Reich, proved they’re a good team, earning their first playoff berth in four seasons and even going on the road to win a Wild Card Round game. Now it’s time for the team to take its next step — and Irsay is confident the pieces are in place to do just that. “Almost going at this thing for half a century, I’m pretty honest about my assessments of where we are as a team sometimes, and these are exciting times in my book,” Irsay said. There will be a commitment to greatness, not excellence, Irsay said, because “excellence means, by Webster’s dictionary, very good. What we want is a commitment to greatness, which means you distinguish yourself as the single team standing.”

» Right personnel: Most great teams have an elite franchise quarterback in place, and we all know Irsay’s feelings about Andrew Luck (“it’s almost impossible to imagine us not having a great year if Andrew has a great year,” he said). But the Colts’ owner knows how important it is to have solid pieces around your quarterback, both offensively and defensively, and Irsay is of the belief the Colts are not only returning the right guys, which leads to quality continuity, but that the additions made this offseason through free agency and the draft should fit in just right. “The defensive line has a lot depth, it has talent and with (Justin) Houston here, it’s a game changer,” Irsay said. “(Jack) Doyle is back. (Deon) Cain is back. Those are big, big bonuses. Those are like signing free agents quite frankly. They weren’t here. So that’s very exciting and you can sense the air of confidence. … You’re adding Parris (Campbell) to the mix, Doyle is back, Cain is back, (Devin) Funchess – I mean, my gosh, that’s a dynamic change for the positive.”

» Healthy lineup: Irsay said he received an extremely brief recap of the injury list from head athletic trainer Dave Hammer — which is a good thing. The fewer names on that list, the better, especially with the regular season just around the corner. The primary concern at this time, Irsay said, is with veteran defensive end Jabaal Sheard, who, according to Reich, has been dealing with some soreness in his knee and has missed the last two days of practice. But Irsay believes Sheard is going to be able to play this season. “It is certainly not a season-ending injury … or anything like that,” he said of Sheard.

» Get the advantage: Irsay remembers talking with former general manager Bill Polian and head coach Tony Dungy after the Colts’ 41-0 Wild Card Round loss to the New York Jets at Giants Stadium back in the 2002 season about how important it was for Indy to focus on getting the homefield advantage in the playoffs moving forward. Not only does that mean you play all your postseason games in front of your home crowd, but you also get a bye week and a few extra days to get ready, which is critical at that juncture. Irsay has alluded to having similar chats with Reich and current general manager Chris Ballard now that the Colts have fought their way back to the playoff picture in the AFC. How can Indy get that homefield advantage this time around? “I don’t think we shy away from that (Super Bowl aspirations) but we also know – and Chris and Coach will say the same thing – is that you’ve got to be confident. I mean you have to have confidence, but it’s tempered with the fact that there is so much that has to happen,” Irsay said, hinting at being a top seed in the AFC. “That’s a tall order. Most people say, ‘Hey you’ve got to probably win at least 12 games.’ And they’re right. That’s very difficult. We look at that, and quite frankly I think everyone aspires to win the Super Bowl going to training camp or you wouldn’t even show up. From an owner’s standpoint and from being really realistic, this team is one of the best teams that I’ve had the privilege to bring to our fans with the general manager and head coach and have a situation that honestly matches some of those days with Peyton (Manning), Edgerrin (James), Reggie (Wayne) and all those guys. Those guys were special and you know you had the bookend rushers and all that stuff. So, we need to have some of these young guys emerge. That’s very important for us to really become great.”

» “More wise, more mature:” Irsay was asked how his philosophy has evolved since he took over as the Colts’ owner more than two decades ago. He said he’s learned just how important it is for a franchise to have unity at the top. “You have to have harmony at the top,” Irsay said. “You have to have two people that are communicating and have – not only have the same goals because everyone always has the same goals about winning — but also going about it in a way that they’re together on the process and disciplined.” Irsay said he has that in Ballard and Reich. “I can’t emphasize enough my praise honestly for Chris Ballard and Frank Reich. It’s really just an outstanding team we have there with those two men leading us and it surely makes my job a lot easier from some days gone by, which are many.”