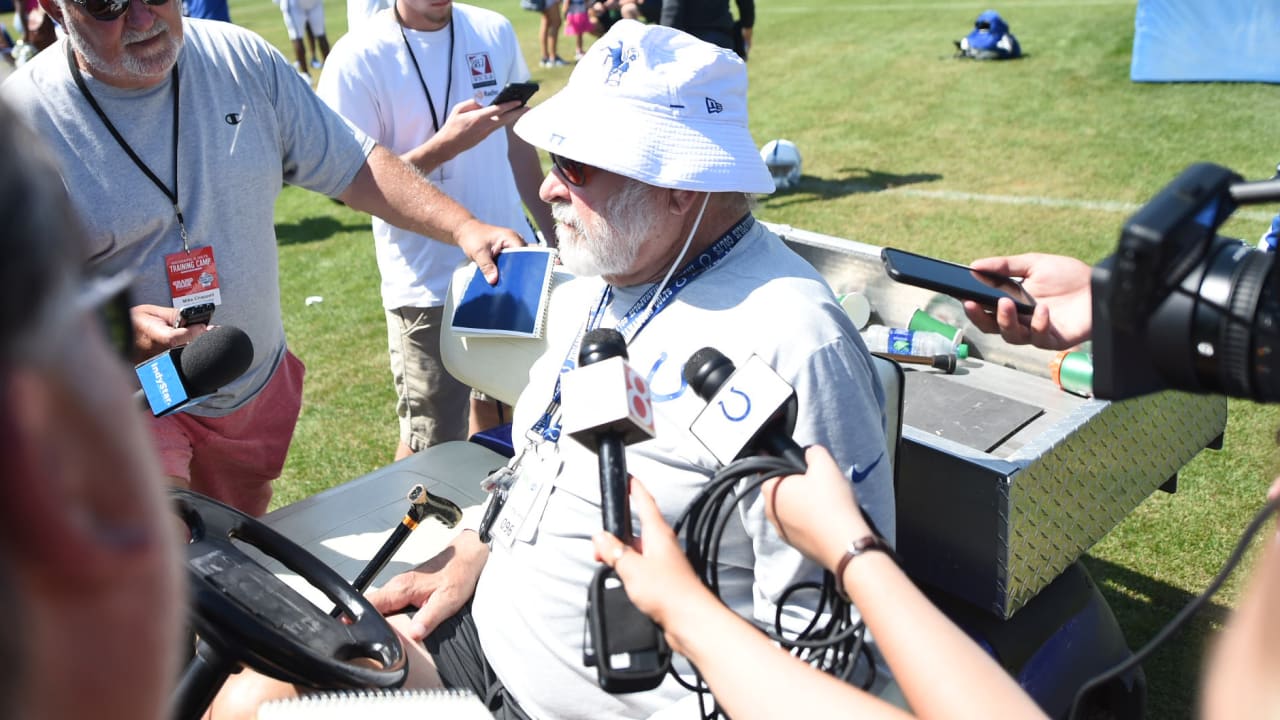 Why come back? You don’t have anything to prove.

Mudd: “My friend is here, Chris Strausser. That’s why. Simple as that.”

So much of the media for the offensive line looks at numbers like sacks. What tells you that you’ve had a good game or a bad game? It’s got to be beyond the numbers, they could be misleading.

Mudd: “Oh yeah, numbers really are misleading. We’re not trying to minimize, in any way, the numbers from last year. I’m more interested in whiffs. We all play golf; if you’re missing a guy, then I get nervous. But the guy you play against gets paid too. I’m not trying to recognize that you can’t get beat, you’re beaten and the quarterback gets sacked. But I’m more interested in the contour of the pocket and how much the quarterback gets hit than I am the actual sack and if he gets sacked, OK fine. Sometimes someone else didn’t get open or – you’re trying to execute your technique the way we ask you to do it and then we feel pretty good.”

In the tape from last year were there a lot of whiffs?

Mudd: “No, there were not. And that was the good part. They basically just stay in front of people and by time, I think like that for the quarterback.”

Mudd: “They did have a good year. Yes, they did. But the pass protection isn’t just the offensive line. There are three aspects to pass protection. It’s getting the ball out when you’re supposed to, the route runner and then the blockers. And sometimes we don’t recognize that part of the scheme was that we use the back to chip a guy, that’s enormous, then the guy caught a pass. Well you guys don’t see that, but it’s all part of the same thing and the rhythm of the passing game that we have helps us a lot and Andrew (Luck) really likes it. He can decide, he knows exactly where to go with the ball. There are very few times where his decision process is scattered so he’s really good at what he does. The receivers got themselves open and then the protectors, we had extra things that we did. Whether it was the tight end slamming a guy before he left or a back coming out and chipping a guy. Those kinds of things are enormous. They’re all part of the same thing. So it isn’t just the five guys up front blocking, but they did a good job.”

When you took this job, one of the things Chris Ballard sent to you was a video of Quenton Nelson, right?

What have you seen up close since you’ve started with Quenton Nelson?

Mudd: “He’s got a live spirit and he wants everyone around him to play with that, regardless of who it is, to play with a lot of enthusiasm. He doesn’t talk about it, he just demonstrates it. I find him to be eager to get better. He was a rookie, you remember that, he was a rookie, so he can get better and he wants to do that. The first thing that he said to Chris Strausser and I, we had him on the phone, and he says, ‘I want to get better. I want my techniques to be better this year.’ Can’t ask for anything more than that.”

Does he remind you from anybody from the previous Colts regime in terms of that mentality?

Mudd: “Well, his body. I mean, we didn’t have anyone like that. (Tarik) Glenn was a big man, but this is a big man. Not really. I mean he’s got some special things that he does.”

Did he just scratch the surface last year?

Mudd: “Oh yeah, no question. He got just a little bit of the surface scratched.”

Mudd: “Well, first of all, we don’t want any free runners. That means … the system picked up the blitz, or the ball comes out. We don’t want people on the edge penetrating the pockets, so the quarterback gets squashed, like this. Sometimes one guy will penetrate, and everyone else is doing fine and he can maneuver in the pocket. But kind of a uniform, we call it a dish, it looks like a satellite dish. It looks like that, and we like that, to give the quarterback … we want separation from where his back foot hit, and where the line, the fence is, if you will. That’s what I like, and that’s what we really stress.”

Has coming back been everything so far you thought it would be?

Mudd: “Well, when you’re a coach you love coaching and seeing progress, interacting. When you retire you don’t have a locker room to go to. Interacting with the players and coaches and watching the progress, is really rewarding. … I don’t know, I didn’t realize that there was some stuff stored down in my brain there … It’s been rewarding to make little contributions here and there.”

The space between the quarterback and the lines, is that why you were always more of a jump sit than a vertical sit?

Mudd: “Yes. 100 percent. I did it when I was a player. That’s … 1964, so that’s about 55 years ago. But that’s what I was taught. We always wanted to make the middle of the pocket. John Brodie was our quarterback. ‘Just keep them up on the line of scrimmage,’ he used to say. Then I’d develop that principle.”

Is that different than most other line coaches?

Mudd: “Yeah, most people set back. It’s called a vertical set, and it really does promote what I was talking about, which was the pocket collapsing, and it can get collapsed. Dwight Freeney ran over Joe Thomas, sack fumble, and we won the game in Cleveland. And Joe, you know how tall, how big he is. So it isn’t about size or any of that concept. Just get them up there in the line of scrimmage. Get in their face.”

How To Watch Arizona Cardinals vs. New England…