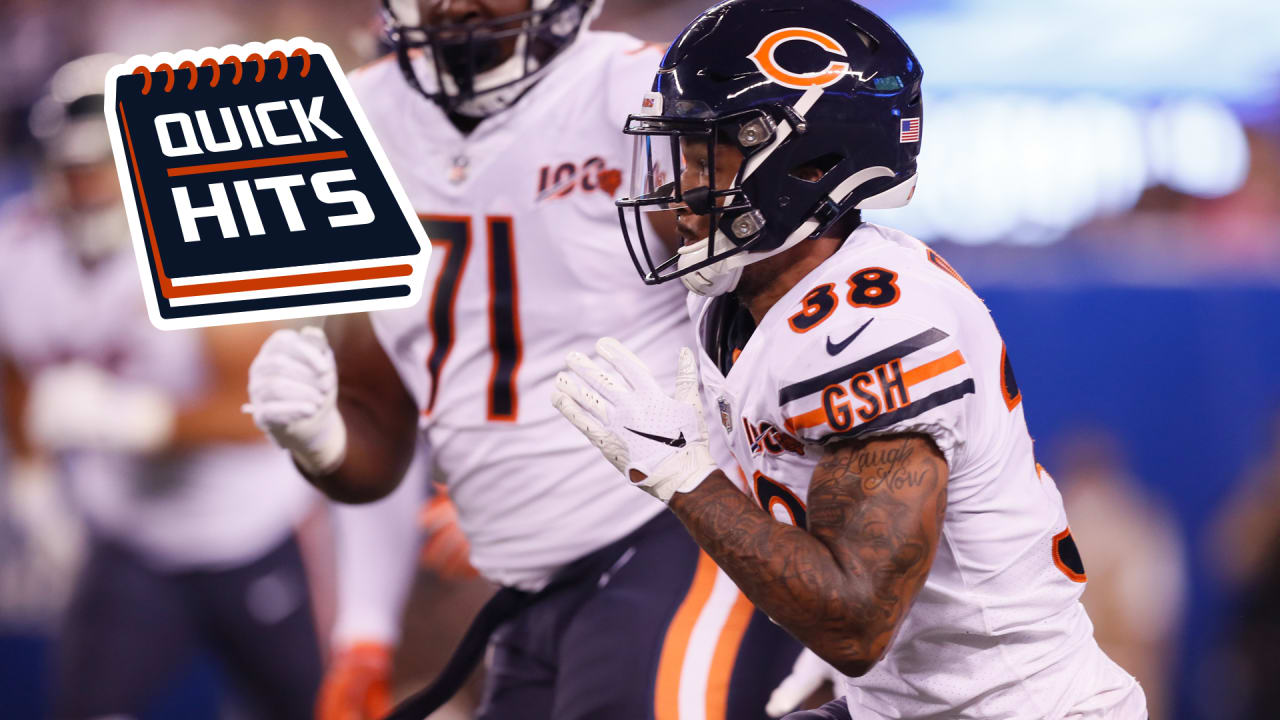 EAST RUTHERFORD, N.J. – Since signing with the Bears as an undrafted rookie in the spring, cornerback Clifton Duck has learned a lot from starting defensive backs Eddie Jackson, Ha Ha Clinton-Dix, Kyle Fuller and Prince Amukamara.

“Just being around guys like this, they make their plays when they come to them,” Duck said. “That’s what I’ve been learning from them all training camp, OTAs—when you get the chance, make your play. That’s what they tell us each time.”

Duck heeded that advice in the third quarter of Friday night’s 32-13 preseason loss to the Giants. With the Bears defense backed up at its own 1-yard line, Duck made a diving interception of an Alex Tanney pass in the right flat at the 1, jumped to his feet and returned the pick 62 yards to the Giants’ 37.

Duck, who recorded 12 interceptions in 39 games over three seasons at Appalachian State, has displayed his ball skills and playmaking ability throughout training camp.

“I think he falls into that deal of being opportunistic,” said coach Matt Nagy. “He’s done it in practice. I like that. Anybody that has some ball skills, which he does, who is always playing hard, you appreciate that, and I know that he makes it difficult for our quarterbacks.”

Stepping up: First-year linebacker James Vaughters made a Khalil Mack-like play in the second quarter when he split a double team, smacked the ball out of quarterback Daniel Jones’ hands, scooped up the fumble and returned it eight yards.

“I just got off the ball, got a little bit of an overstep from the tackle, and just tried to take as much advantage of it as I could,” Vaughters said. “We practice strips every day in practice. The ball was sitting out there, so I just knocked it out the best I could.”

Vaughters is in his first season with the Bears after spending the last two years in the Canadian Football League with the Calgary Stampeders. In 33 games, the Stanford product registered 50 tackles, 11 sacks and eight special-teams tackles.

Faith in Chase: Before being replaced by Tyler Bray to start the third quarter, Chase Daniel completed 12 of 18 passes for 103 yards and an 81.5 passer rating in the first half.

Daniel was sacked three times—including twice in a three-play span for losses of 5 and 12 yards after the Bears had started a possession at the Giants’ 12. Instead of a chip-shot field-goal, Elliott Fry missed wide left from 47 yards.

“Incompletions in that scenario make it a much easier field goal,” Nagy said. “Every yard you lose in a field-goal attempt can make those percentages go down. But I have ultimate trust in Chase, or else he wouldn’t be here. I like where he’s at.”

“We’re going to keep the details of that internal,” Nagy said. “What I mentioned the other day is we want to make sure that we handle these type of situations the right way and we had discussion and so we felt like that was the right thing to do.”