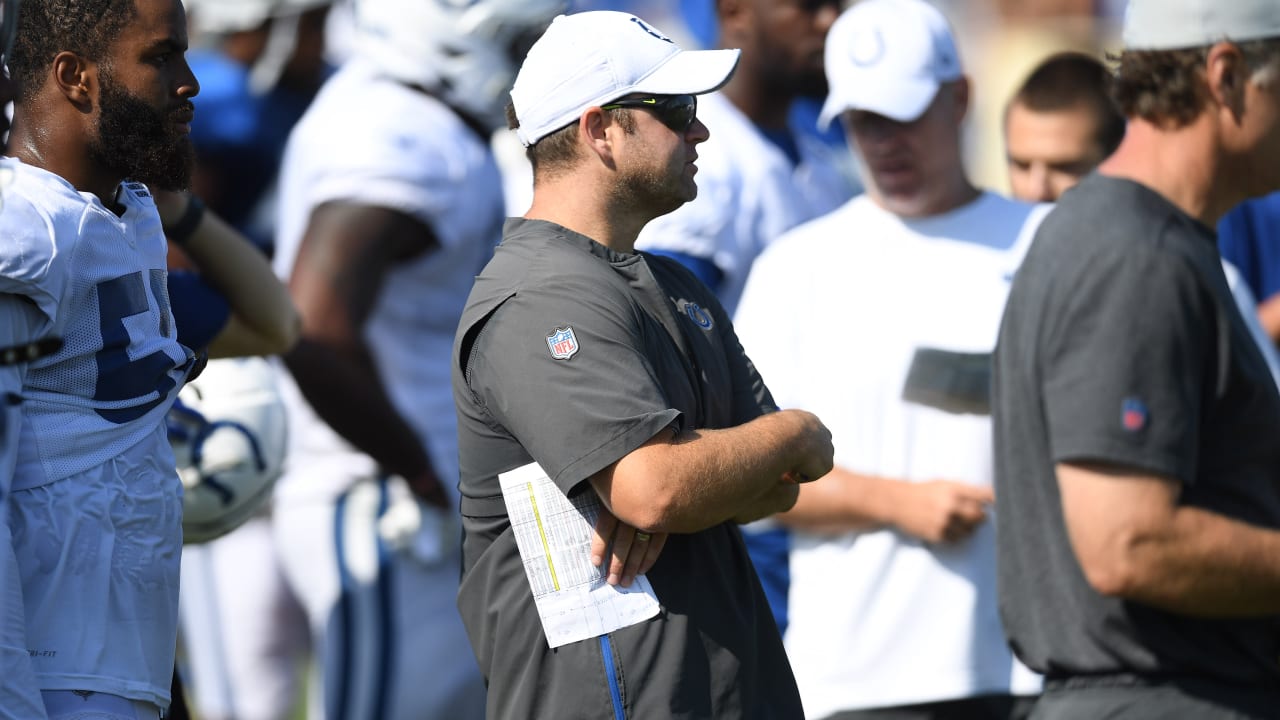 What’s your take on E.J. Speed so far?

You obviously have felt that he could handle enough to throw a little SAM linebacker at him. How has he adjusted?

Borgonzi: “Yeah. I mean, to be honest, we try to cross-train all of our guys. So he’s playing SAM, he’s playing a little nickel WILL. It’s that time of the year where you want to train guys in different spots, because in the NFL over the course of the season, you’re going to need these guys to play, at some point, a position maybe they haven’t played before.”

When you watch film and you see a three-man group being Leonard-Okereke-Speed, with their size, length and speed is that just exactly physically and skillset-wise what you want in this defense, being sideline to sideline?

Borgonzi: “Yeah, I mean that’s a good looking group. But at the same time we’ve got other guys that can play too. So whether it’s those three guys or Matt Adams, Zaire Franklin, Skai Moore, Ahmad Thomas, we feel, you know, we’ve got a really good group of guys. So yeah, obviously those three guys ‘cause their size — they look a little bit different. But you know, the other guys bring something to the table too.”

With this defensive system, what’s your background in it before coming here?

When this defense is done right, it just seems like hustle, striking ability, athleticism…

…Right. So when it’s done right, what does it look like out there?

Borgonzi: “Oh, it’s beautiful. You know, we want to showcase our players’ talent. So if they’re fast and they’re physical, we don’t want to slow them down by over complicating things. So that’s what we try to stress it on these guys and say, ‘We’re not gonna throw a hundred different defenses at you. We’re just going to get good at what we do and allow you to play fast and physical.’ And that’s the beauty of our system is, hey, these guys get it. They know it, and it allows them to play fast and be physical.”

What is Anthony Walker’s greatest strength?

Borgonzi: “Anthony’s got a lot of positives about him. He’s really smart. He loves football. He works at it. He’s the type of guy, he’s so much better from this point last year till now. I mean he’s, he’s gotten so much better…”

Better within the system or physically? I know he kind of reshaped his body a little bit.

Borgonzi: “Yeah, I mean he’s definitely cut his body fat down. He reshaped his body. Just the mental part of it. I mean, he sees things and as linebacker sometimes, you know, you see formations, pre-snap indicators. Anthony studies the game. He works really hard.”

For Bobby Okereke, playbook-wise, do you feel like he can handle a full workload? With Stanford in his past you know he’s obviously a very smart guy.

Borgonzi: “Bobby is really smart and you know, again, that kind of goes back to the pre-draft process, getting to know the player, and he was impressive during the interviews and the Combine. Spent some time with him. So yeah, he’s a smart kid. You know sometimes smart guys aren’t football smart but he’s smart and he’s football smart.”

Were you surprised in the draft process when the team selected three potential linebackers?

Borgonzi: “I was satisfied, you know, you spent a lot of time with the draft process and sometimes some drafts you don’t draft any guys. Sometimes you draft two of them. So, you know, I was really happy with the guys that we got.”

And it’s not necessarily an indication of the guys you had before, just an added emphasis on talent and competition.

Borgonzi: “Yeah, and that’s what you want to do. You just want to keep adding depth to your roster and adding competition. And that brings out the best in everybody. And you know, these guys have come in and they’ve done a good job.”