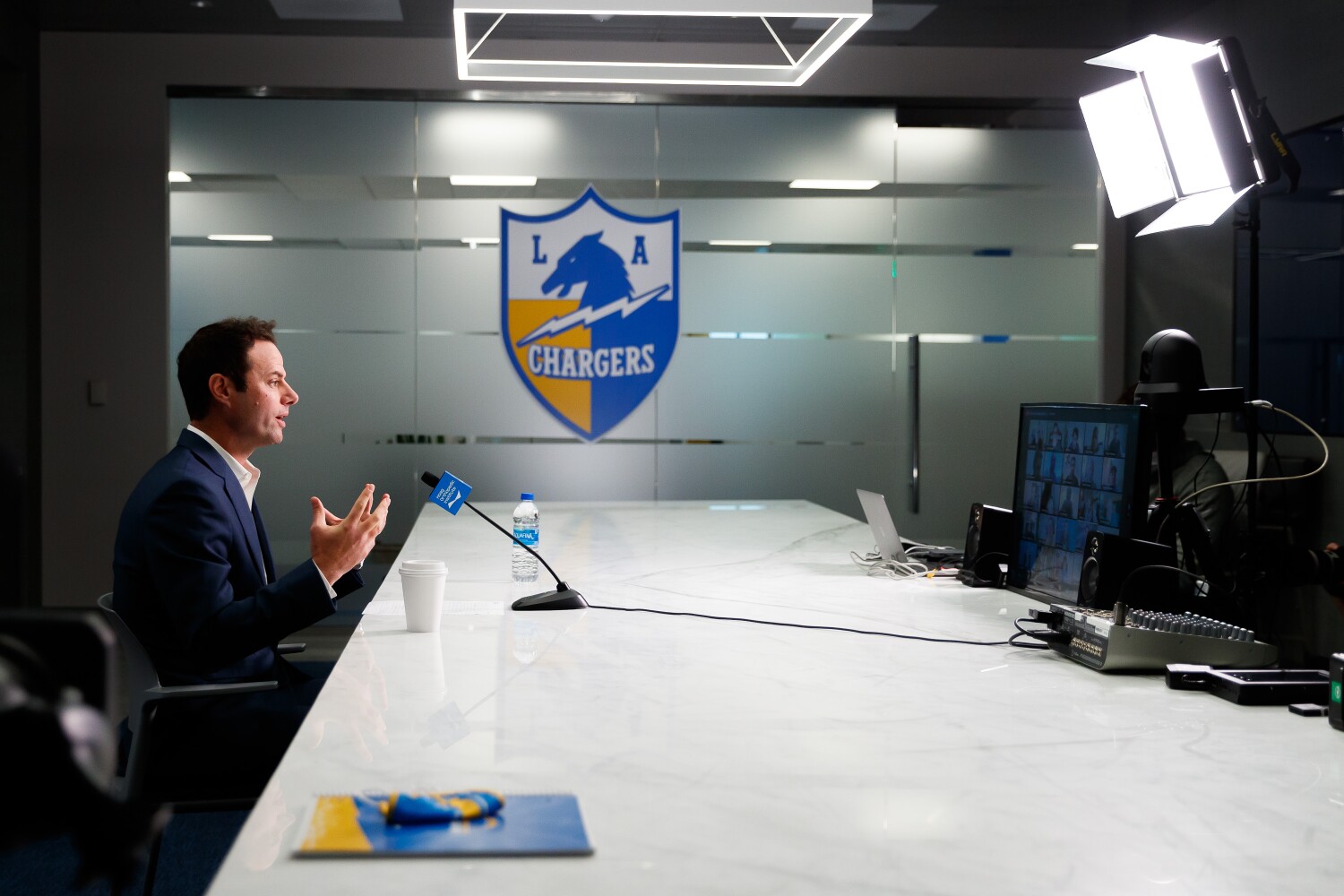 Approximately three weeks from being on the clock, the Chargers have two gaping holes and — right now — only one first-round draft pick to fill them.

Both are at vital positions — left tackle and cornerback — and no one can be certain what the Chargers will do when the No. 13 overall selection arrives on April 29.

Brandon Staley met with reporters via video conference for an hour Thursday and never once even hinted at the team’s plans, the rookie head coach already performing like a veteran.

But Staley spoke plenty about both openings as the Chargers enter an especially significant draft coming off back-to-back losing seasons and moving forward with an overhauled coaching staff and young, potential franchise quarterback.

For weeks, the general belief was the Chargers would take an offensive tackle at No. 13, with Rashawn Slater and Christian Darrisaw among the most-often mentioned names.

Yet, the idea of cornerback emerging as the team’s top priority continues to gain momentum. Analyst Daniel Jeremiah, who does radio for the Chargers, has them selecting South Carolina’s Jaycee Horn in his latest mock draft.

A year ago, general manager Tom Telesco took quarterback Justin Herbert with the No. 6 pick and then traded back into the first round to secure linebacker Kenneth Murray Jr. at No. 23.

So, there’s precedent for the Chargers to fill both spots on Day 1, if Telesco again is willing to part with the necessary assets. And he does have two additional draft picks to work with in 2021.

The Chargers are looking for a cornerback to pair opposite Michael Davis, who recently signed a three-year extension worth up to $25.2 million.

Staley gushed about Davis’ size, length and speed, saying he can run “with any of these cheetah cats out wide, I mean, all these guys that you know about, that you write about.” He also said Davis, 26, is in just the “beginning of his development.”

The Chargers have another starter in veteran Chris Harris Jr., though his best production has come in the slot. That leaves outside cornerback as the need, with players such as Caleb Farley and Greg Newsome II among the other top options available in the draft.

Transitioning to a more varied, disguise-based defense, the Chargers are searching for a corner who can play man-to-man — a departure for this team from recent seasons — and handle what Staley called “the critical factors” for the position.

“For us, it’s being able to play man-to-man,” he said. “That’s where it starts. You have to be able to cover man-to-man.”

That means, Staley further explained, starting from off the line of scrimmage as well as from press coverage. He said “the critical factors” at cornerback also include ball skills, down-field judgment and open-field tackling.

As for the team’s next left tackle, Staley said the most important skill will be the ability to pass protect, particularly in one-on-one situations. The Chargers have rebuilt their offensive front, with veteran right tackle Bryan Bulaga the only holdover.

This draft is considered deep at tackle, giving the Chargers even more options. Staley said what really matters now is projecting how a player can develop after entering the league.

“Sometimes, going into the draft, what you gotta do is close your eyes and say, ‘OK, what’s he going to be like in the spring of 2022 not August of 2021,’ ” Staley said. “Sometimes, with O-linemen particularly, I think that’s what you have to do.”

Staley also dismissed the idea that left tackle is automatically more significant than right tackle. Traditionally, the left side has been considered more vital since that’s the player protecting a right-handed quarterback’s blindside.

Considering the way defenses shift today, Staley said both tackles have to be equally adept at protecting. The Chargers in recent years lined up star defensive ends Joey Bosa and Melvin Ingram on either side and, sometimes, even next to each other.

“You gotta have tackles,” Staley said. “Left and right? That doesn’t exist anymore because these guys (on defense) move around. … You have to have tackles and they have to be mirrored players.”

Under Staley, who emerged as a head coaching candidate because of his work as the Rams’ defensive coordinator in 2020, the Chargers will employ a variety of looks on both sides of the line of scrimmage.

Saying he wants to be “a matchup-driven team,” Staley reiterated his plan to build the various schemes around the players and not the other way around.

“You use personnel groupings as a weapon,” he said. “You want to put people in conflict every single snap. Part of the way you do that is with a variety of groupings that they have to prepare for.”

Staley said 2019 fifth-round pick Easton Stick and recently signed veteran Chase Daniel will compete for the No. 2 quarterback job. … The Chargers plan to keep Jerry Tillery as an interior defensive lineman, though Staley said he does have the ability to also play outside. Former defensive coordinator Gus Bradley used Tillery as an end for stretches last season.

Chargers need to sell out on adding linemen,…

Jeff Bezos’s link to Chargers is his latest…