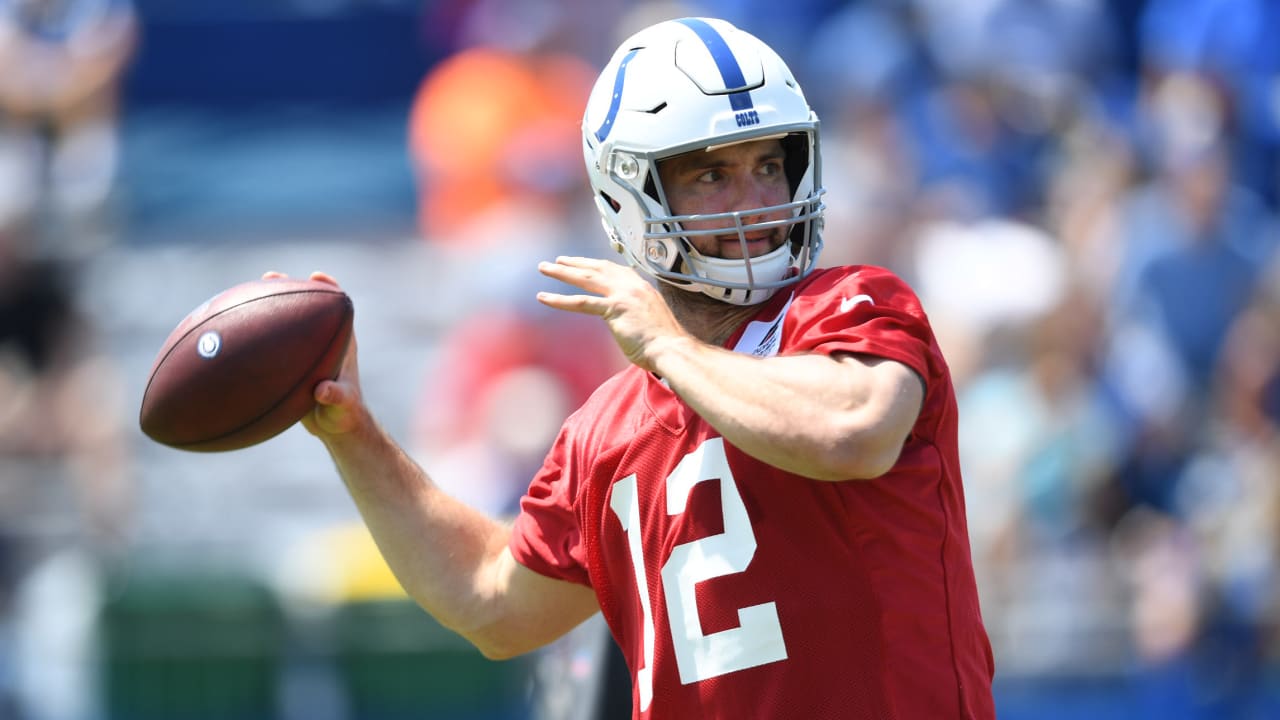 WESTFIELD, Ind. — Frank Reich referred to it as an “unspoken truth.”

On June 10, the whole sports world watched on as Golden State Warriors star forward Kevin Durant, who was trying to play through a calf strain, ruptured the Achilles tendon in the same leg during Game 5 of the NBA Finals.

It was an unfortunate reminder of the risks athletes take when they’re trying to push themselves to the limit and aren’t exactly at 100 percent.

Fast forward to Thursday, and Reich is being asked about his quarterback, Andrew Luck, who only had a limited role during the team’s first training camp practice of the year at Grand Park Sports Campus in Westfield, Ind.

Luck, too, suffered a calf strain early during the offseason workout program, and while the injury has always been considered relatively minor, the team has decided to take an extremely conservative approach when it comes to its starting quarterback.

Reich admitted after Thursday’s practice that the Durant scenario was in the back of his mind as the team put together Luck’s plan for the first few days of practice.

“We didn’t really talk about it, but I think we all knew it,” Reich said. “I was thinking it. I was certainly thinking it. I didn’t have that conversation with Chris (Ballard) or with any of our trainers, but that’s this business. When you see something like that happen, you are like, ‘Oh yeah. That’s why you do what we are doing.’”

Luck on Thursday stretched with the team, participated in early positional drills and then threw some routes against air with the receivers before putting his hat on and watching the rest of practice from the sideline.

But that amount of action was just right for Luck, he said after practice.

“As you know it’s all about progress,” Luck said. “I think I did an appropriate amount of work today, got better and we’ll keep adding, adding and adding.”

Luck’s experience Thursday was a far cry from what he was going through at this time last year, when he participated in his first full team practice since missing the entire 2017 season due to shoulder surgery.

In other words, the lessons learned from that whole experience make this calf injury much easier to bear.

“I remember walking through that sort of tunnel in the trees (last year). Today, I was sitting there thinking about it and how scared I was to go practice and how nervous (I was). I had no idea what the heck was going to happen on this practice field. I remember it being a very powerful feeling and then feeling so happy and almost relieved that I survived practice; ‘My arm is still attached to my shoulder,'” Luck said. “That’s certainly a much different feeling this year. But, also, when we talk about patience and stressing the process, it was almost forced upon me last year and I know I learned so much from it.”

Reich said the goal is to continue bringing Luck along slowly the first few days of practice. The next step for Luck will be getting into 7-on-7 drills — a process that could last “a few days,” Reich said — and then he can eventually get back into 11-on-11 work.

The main priority, Reich said, is to ensure Luck is good to go for the 2019 season opener on the road against the Los Angeles Chargers. He’s confident his quarterback will make up for lost time between now and then.

Steelers Vs Texans Winners And Losers